ABBY Finereader is advertised and even praised by critics but does it really read fine?

The range of Optical Character Recognition (OCR) software products isn't crowded like any other field. Probably because it is difficult or a skilled job to develop OCR technology on our own which would be accurate in order to capture the market.

ABBYY has its own optical character recognition (OCR) technology which is being developed since 1989. In the latest version 12, it supports 160 languages!

The use of OCR software is to convert Paper documents, Digital images, and PDFs into a searchable and editable format. Basically, we are avoiding the time and effort spent on retyping. So, the main point of focus for the ABBYY Finereader Pro review would be:

The interface of the software is divided into three views:

My tests started with the easy-to-read cover page of a book that has bold text and not-so-complex images.

Though, the output document had some "low confidence text", that's what ABBYY calls unrecognizable text. To my surprise, even those marked were correct and it was just that software didn't have the courage to say that. ;-) 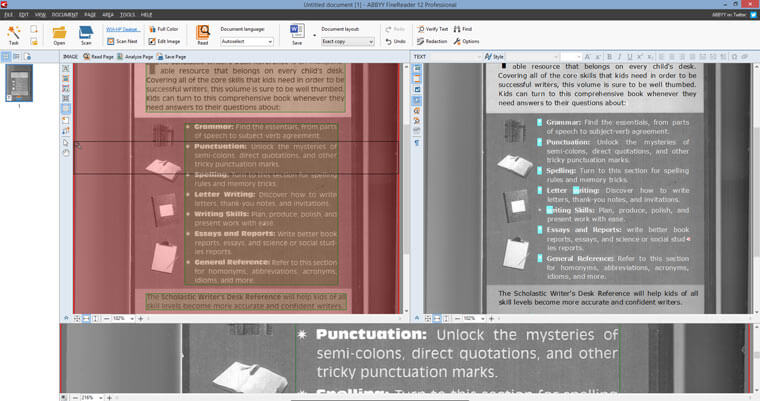 Then, I scanned an old travel magazine page that had images as well as text in separate boxes.

As you can see, the text has been recognized and formatted into separate boxes and even the headings have been background color.

When converted to Word or Searchable PDF, formatting was kept intact along with the images in place. It could accurately detect:

Note: Scanning quality through ABBYY software wasn't really good as compared to native HP application. This may be because the ABBYY engine is programmed for OCR and forces the image to be in grey-scale. I tried changing the driver but couldn't get it right so, scanned the image through the HP solution center and then gave it as input to ABBYY.

To take the test to an extreme, I tried a greeting card that had a message in a stylish font which is not so easily readable.

Here, ABBYY failed miserably. It automatically considered every part as an image and refused to read anything automatically. However, I marked text areas manually and commanded them to read. Results are in front of you: totally not acceptable.

Anyways, ABBYY Finereader is designed considering Legal documents or anything required in the corporate world. There would be hardly a case that would involve a casual/stylish font document. So, I think we can ignore it.

The conversion Speed of ABBYY Finereader was almost instantaneous! ABBYY automatically detects areas whether text, image, table, etc and tries to convert which is shown in the preview. One good thing about the software is that when you give input of a large document (say 50 pages), it converts initial pages and lets you verify/edit and in the meantime converts the remaining document.

ABBYY's dominant place in OCR software products is justified and without a single doubt, it is the perfect companion at the office. Owing to its accurate optical recognition feature and versatile output format options, it is unbeatable in the category. For the record, I have tried Adobe Acrobat XI but their homegrown OCR technology stands nowhere.

Do you still doubt it? If you are still not convinced, go grab a trial version and experience the unmatchable yourself. For a limited time, you can get a flat $60 USD discount using ABBYY Finereader Coupon.