When Microsoft added native indexed search capabilities to Windows, most people predicted the demise of desktop search utilities. It proved to be true to some extent. Google Desktop Search, the most popular utility in this genre, was officially nixed in 2011. Yahoo, which provided a search tool built in partnership with X1, let its software languish without any updates. With fast, indexed search capabilities built into Windows, most people simply didn't need a third-party tool to locate documents. Others like Copernic and X1 have successfully carved out a niche for themselves.

In an enterprise, large quantities of content (documents, emails, presentations, etc.) are generated every moment. Teams are often geographically distributed, and there is constant churn in the workforce. A powerful network drive and desktop search tool can be crucial aids in tackling information overload and facilitating data discovery.

Organizations stand to gain tangible benefits by empowering employees to identify and access the information they need at their fingertips. It's not just enterprises that can take advantage of a powerful desktop search tool. Anyone who works with large volumes of emails or documents -- from lawyers and doctors to interior designers and students, stands to gain from a fast and efficient search utility. Professionals often need to refer to past projects, and a powerful search tool can be invaluable in locating the relevant documents and emails. 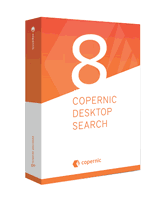 So, now lets dive in to know more about what exactly copernic can do and why it scored such good points in our tests.

About Copernic: Story of the Company

Today, we will explore Copernic Desktop Search, which is probably the most well-known and popular Desktop Search Tool. Copernic is a subsidiary of Constellation Software Inc., based out of Quebec, Canada. The company began its journey in 1996 as 'Agents Technology Inc.' and changed its name to Copernic Technologies Inc. in 1999. It was acquired in 2005 by a search engine aggregator (a search engine that combines and presents results from multiple other search engines), Mamma.com. Mamma later rebranded itself as Copernic Inc. and ended up getting acquired by the current owners, Constellation Software Inc., in 2010.

My first exposure to a Copernic product was in the early 2000s, through the now discontinued ‘Copernic Agent’.

It might sound incredulous now, but Copernic Agent was a desktop utility for searching the web. The Agent featured over a thousand search engines and enabled you to do specialized searches such as searching for movie rentals or electronics in the days when Google Search itself was pretty bare-bones. A couple of years later, Copernic introduced Desktop Search to enable near-instantaneous local search as storage became cheaper and file clutter became a real problem.

Copernic Desktop Search comes in three flavors. The most popular Professional Edition package costs USD 25.49/year. A 30-day trial of the full version is available, and I'd recommend installing it to decide for yourself if you need the advanced features. Getting started with Copernic is remarkably simple and straightforward. Download the installer and install with the default settings. On the first launch, Copernic displays a quick, 5-step introduction while it begins building its database in the background.

By default, Copernic ignores the system folders (Windows, Program Files, etc.) and User folders except for Documents and Desktop. It scans and indexes everything else. You can review these settings by navigating to Tools --> Options --> Files. Also, Copernic Desktop Search can scan and index Cloud storage services like Dropbox, Google Drive, Microsoft 365 (Outlook / One Drive), and network folders.

You can index Emails and Contacts from Outlook, Eudora, and Thunderbird. Copernic integrates tightly with Microsoft Office. It also supports OneNote, OpenOffice / LibreOffice Writer, Calc & Impress. The inclusion of Outlook PST file indexing is another feature. It also indexes favorites and browsing history data from Chrome, Firefox, and Internet Explorer.

Copernic Desktop Search is capable of looking inside compressed files (Zip, Rar, 7Zip). Copernic groups various file types into these categories - Emails, Pictures, Calendar, Videos, Music, Files, Organizer, and Contacts. You can define how often the index for each type of file is refreshed by navigating to the 'Indexing & Performance' tab in Options.

When you launch Copernic, it opens with a spartan interface. The 'Search' bar is at the top, with optional filters available on the left-hand side. Key in a search query, and the results pane is ready in a second or two. Selecting any result shows you a preview of the file at the bottom of the screen. The results pane is tabbed and grouped into categories like Email, Pictures, and Videos. 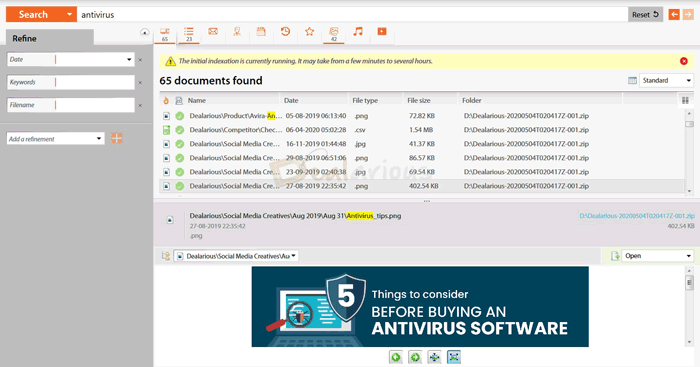 The biggest differentiator between Copernic and Windows 11 search is the Preview Pane. Select any file returned in the search result, and Copernic will display a preview. You can view emails, PowerPoint presentations, documents, and video files without having to leave the tool. The contents of attachments inside emails or documents present inside compressed files are instantly visible.

The Copernic Preview Pane automatically jumps to the location of the search string and highlights the matching words. It doesn't always work – for some of my PDF files, Copernic was able to return the correct result, but the Preview Pane showed the first page of the document instead of the page that had returned a hit.

If you are looking for an audio file, you can use filters like artist name, album name, and composition length. You can also filter Emails using subject, sender, recipient, and email folder. The search experience is fast, efficient, and, most importantly, simple. You have a wide range of filters and operators at your disposal, but the user interface is intuitive enough that you won't need a training manual.

For my testing purposes, I created a 5.69 GB folder containing almost thirty thousand files, including Gutenberg Archives, presentations, videos, images, and audio files. I install Copernic on my laptop with Intel Core i7-2630QM CPU, 8 GB of RAM, and Intel SSD (SSDSA2M160G2HP). Copernic offers three indexing modes – Unrestricted, Restricted, and Smart. If you select Unrestricted, Copernic will aggressively use resources to offer the fastest indexing speed but might impact your system performance. Indexing is the slowest in Restricted mode as it forces Copernic to conservatively use system resources. Smart mode offers a balance of the two.

For my benchmark, I used Unrestricted mode. Copernic needed 43 minutes to index my test documents, and the index occupied 2.63 GB. By default, Copernic indexes the first 20 megabytes of every document (excluding images). Since my sample predominantly included small text files and ebooks (PDF and ePUB), they were indexed in their entirety. The document size to index ratio should be significantly smaller with real-world examples that will probably include a fair share of multimedia.

Copernic's CPU usage is negligible at rest, and memory usage hovers around a hundred megabytes. The CPU consumption hovers between five and ten percent while performing searches. The CPU, Memory, and Disk usage of Copernic was well within acceptable parameters, but using it obviously has resource costs associated with it. It needs a fair bit of storage for its index. You can reduce the space usage by fine-tuning the options, but doing so will reduce the utility of Copernic. The good news is that you can store the Copernic index anywhere, including external and network storage.

Is Copernic Desktop Worth Your Money?

Copernic is a niche product that's quite obviously not for everyone. If you often use Windows search, you will probably benefit from a dedicated desktop search utility. Copernic offers a 30-day trial during which you can use all features and functions for free during the trial period.

Additionally, it doesn't support external drives, network drives, and email indexing. You cannot Customise indexing schedules or increase the 20 megabytes cut-off. If your needs are demanding enough to merit a third-party desktop search tool, you'll almost surely feel the need for the full version. The good news is that the Copernic license is good for a lifetime and minor version updates are free. Copernic delivers on its promises and gets a thumbs up from us for being fast and powerful yet simple and unintimidating.