Bitdefender is definitely one of the trusted names when it comes to protecting your PC, from common and not-so-common security threats out there. We have already seen difference between Bitdefender Free Edition and Paid but in paid versions too, there are many choices. 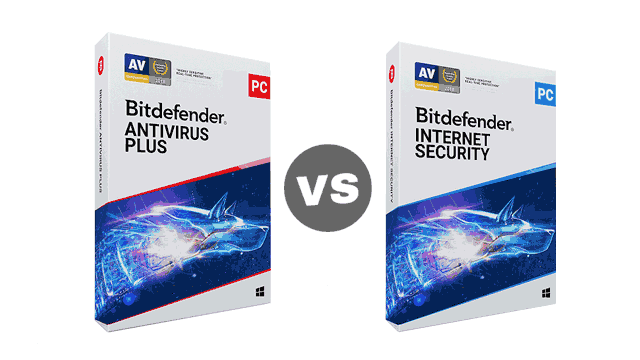 Bitdefender Antivirus &. Bitdefender Internet Security — What They Are Meant For

As you know, Bitdefender Antivirus is meant to give you protection from various threats your Windows PC will face, ranging from small viruses to potentially dangerous spyware. These threats, as you know, can be a nightmare if you store important data on a PC.

Bitdefender Internet Security is, however, an advanced level of protection. This version extends protection into the web-based activities of the user, by introducing some stunning features. It has to be noted, however, that both the tools have some capabilities in common.

As we said, some protection-oriented features are common in both Bitdefender Antivirus and Internet Security. The notable ones are:

Well, there are serious differences as well. We shall now check out what you’ll miss by sticking to the basic version of Bitdefender Antivirus.

What you'll miss in Bitdefender Antivirus

This additional firewall would be quite useful for the Pro Internet user out there. It doesn’t matter whether you have been connected to a LAN connection or public Wi-Fi, the firewall will be kept active to ensure the security of the PC and thus to obstruct hackers and other wrong hands.

As opposed to Bitdefender Antivirus, Bitdefender Internet Security comes with wider support for parental controlling options. You can not only monitor what your children are doing, but also restrict them from accessing unwanted stuff.

This revamped technology, based on Cloud, makes sure that least spam emails reach your inbox! You not only save your time but also reduce the risk of being trapped.

Which is better Bitdefender Antivirus Plus or Internet Security?

Considering all these and the pricing, we think it’s good to go with Bitdefender Internet Security rather than stick to Bitdefender Antivirus. For an amount less than $10, you lose features such as enhanced firewall and parental control, which are useful in this Internet era. At the least, you don’t miss the stunning antivirus features, either. Whichever option you choose, don't forget to configure Bitdefender in order to have a worry-free experience.