We would say, with no doubt, that Bitdefender is one of the best available antivirus software you can go for! After all, awarded as the best detection engine by AV-Comparatives Test. It’s one of the worth-depending-upon solutions when you need advanced protection, from not only common viruses but also further threats such as spyware, spam stuff, social media privacy, web security, etc.

Bitdefender has discontinued its previous Bitdefender Antivirus Free Edition for Windows PCs, effective from Jan 2022. After almost three months, Bitdefender has announced their new free edition of Antivirus with new and improved features. Select the platform on which you want to install Bitdefender Free Antivirus. 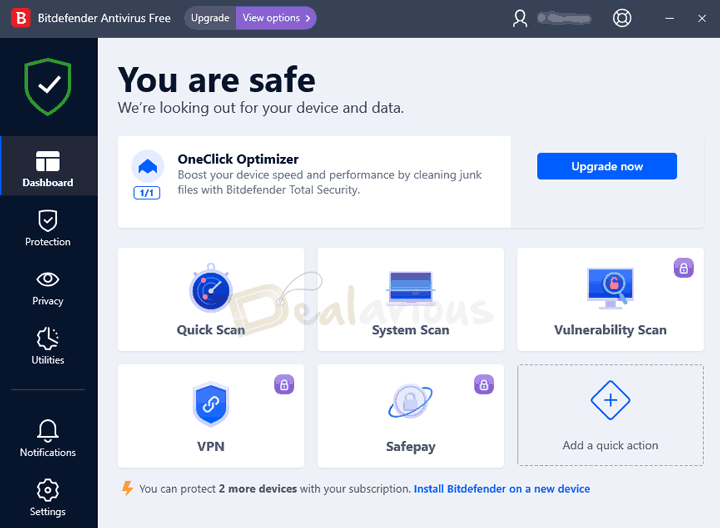 In the section below, I will go through the features that you get while using the Free Bitdefender application.

Bitdefender knows that every PC is different, in one way or another. It is why Bitdefender developed a technology called Bitdefender Photon, which can optimize the security solution to get you the best results. This behavioral analysis is present in the core of the antivirus solution, and it determines the best possible scanning decisions.

The best part of Bitdefender Photon is that it can check every application you have on your device and act accordingly, based on its behavior. Also, Bitdefender Photon has a list of trustworthy software — based on system analysis — and leaves the safe ones to create less system waste at the end of the day.

In short, you have protection dedicated to your PC and the way you use it.

The Bitdefender Free version includes the web protection module. It installs on your browser as a plugin. Hence, it can scan and secure your browsing activities.

Additionally, you can also blacklist websites or add blocked websites to the whitelist. Hence, you get complete browsing security with flexibility. 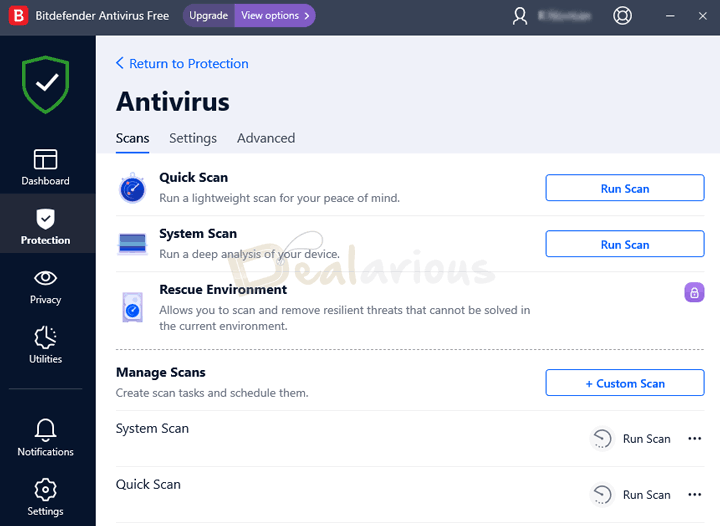 Apart from scheduling a System Scan or a Quick Scan in the Free edition, you can also create a Custom Scan accordingly. You can add or remove folders and files from scanning using the Manage exceptions option. Using this option, you can add folders that you are aware of attracting false-positive detection. However, you should always use the exceptions option with utmost care. 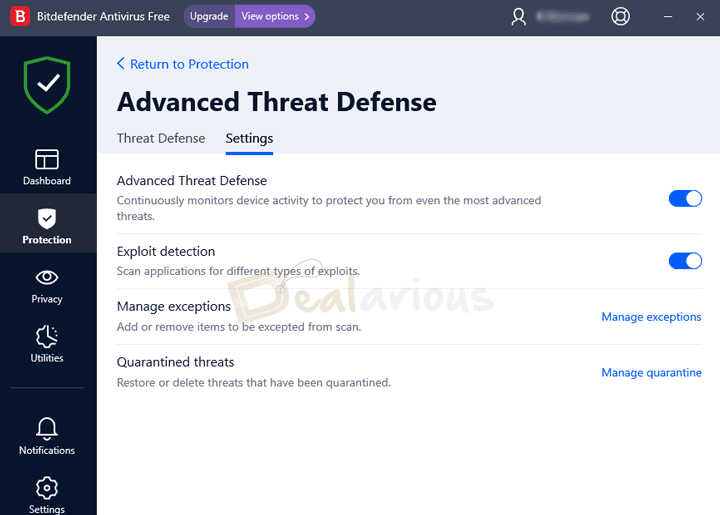 Tip for Educational institutes Take advantage of the Bitdefender student discount to purchase the best protection at a cheaper price online.

Bitdefender Family Pack is specifically designed to protect more than ten devices (upto 15 devices) with a single license. The only difference between Family Pack and Total Security is the price and the number of supported devices.

Now, we shall check out the features you will possibly miss — or at least sense the absence of — in the free edition of Bitdefender Antivirus.

Not all features are available in all the plans. You can learn more about the features that you get in each plan in compare Bitdefender products article. And, these are the most prominent features you can find in the premium counterpart.

Bitdefender Antispam feature uses cloud email security to ensure a smooth email flow against malicious cyber threats. This feature filters irrelevant messages in your local email client to secure your sensitive information. You can also manually trifle with the Antispam Settings to suit your best needs which will be protected by the strongly improved security algorithms of Bitdefender.

Bitdefender Safepay can be interpreted as one of the professional ways to keep your confidential information safe as you process financial transactions and all. It’s a minimal web browser you can use during financial transactions, such as the purchase of something. To support this technology, Bitdefender has integrated a password module, Bitdefender Wallet, that can store your web service credentials as well as payment details, which can be used for auto-refilling of information required. This secure browser can help you a lot when you are using a public network — public Wi-Fi hotspots — for payment. Those who travel a lot will understand the absence of this feature, we suppose.

This is a very useful feature an antivirus solution would possibly have! You may come across pen drives or other sorts of removable media that contain viruses. You can, quite conveniently, use USB Immunizer to remove viruses from it and use it safely. Moreover, this feature is designed to work automatically on the detection of a removable device. Hence you go worry-free.

This feature automatically analyses unnecessary junk files and takes the necessary steps to remove them to boost the performance of your device. However, you can only enjoy the benefits of this feature if you purchase Bitdefender Total Security or higher versions.

This is the most important feature you will miss in the free edition. Ransomware is a big security issue nowadays and losing this protection is usually not recommended. If you are using the free edition, make sure you are downloading applications from sources that you trust.

Bitdefender should add this protection to the free version as well. Ransomware protection is available by default in popular antivirus solutions like Avast Free and also on Windows Defender.

Another feature that you will miss in the free edition is VPN protection. All the paid Bitdefender packages by default include a VPN with a 200MB daily data limit. Would you like to upgrade to a Premium VPN subscription? You can opt for a separate Bitdefender Premium VPN version that supports up to 10 devices. We recommend getting the Bitdefender Premium Security that includes Premium VPN, a value-added service for premium customers.

The Anti-Theft feature helps you locate and secure your stolen device by blocking device access with a custom code and wiping device data remotely. These actions require your device to be connected to the Internet.

Parental Control in Bitdefender allows you to check and monitor the activities and location of your kids across multiple devices through Bitdefender Central. You get access to block websites that you feel are inappropriate for your kids, thus, protecting them from improper online content.

You can also limit their screen time, schedule restrictions, and many more. If they cross restricted boundaries, you will immediately receive a notification making sure they are consuming the right amount of appropriate information. However, you get access to this incredible feature only from Bitdefender Internet Security and higher versions.

A completely advanced security feature that allows the user to scan and remove resilient threats that can not be removed while Windows is operating. Thus, this feature reboots your system in the Rescue Environment to clean up advanced malicious threats, such as rootkits, before your computer starts operating again.

Bitdefender Free Vs Paid: Is it worth paying for Bitdefender?

At the end of the comparison, we can confidently say that Bitdefender paid edition offers some useful features! In addition to productivity, these features can secure your internet life, accounts, transactions, etc, by adding an extra layer of security and privacy. One thing that should be kept in mind is that when you pay someone, the company is liable for any problems faced.

Privacy and security are something not to be compromised so, do not risk yourself. Take the decision wisely.

If you just need basic protection from common viruses out there, Bitdefender Antivirus Free Edition would do that job. Of course, you can have the simplicity and lightweight nature of Bitdefender paid Antivirus in the free edition.

Which is better: Bitdefender Free or Avast Free Antivirus?

The free version of both antivirus programs provides real-time protection. As mentioned above, there are some features in Avast Free like Ransomware Protection and Wi-Fi protection that you will miss in the free version of Bitdefender. You can try both and then make the right decision.