ZenMate, a long-time player in the VPN market, has made its presence felt since 2014 and is currently operational in more than 35+ locations worldwide. It offers both free and paid services to users and claims to have as many as 47+ million users around the globe.

With a great emphasis placed on security, it promises to be “Fast. Secure. Easy.” Read on to find out if it stays true to that claim.

In markets since 2014, ZenMate is a Germany-based VPN tunneling services provider. It started as a free privacy extension for Google Chrome but now offers compatibility with most major devices and operating systems.

Zenguard launched it in 2013. However, Kape Technologies owns it since October 2018. Zenmate was last funded through equity crowdfunding and keeping online privacy concerns in mind.

They claim to give you 100% anonymity. Hence, ZenMate's marketing message. However, in my ZenMate VPN review, you can find out if this is a gimmick or whether the VPN holds to the strictest standards. 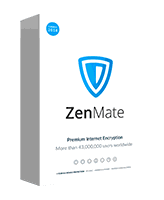 This pretty straightforward VPN targets non-technical customers or beginners who wish to make use of a simple VPN service. It protects up to five devices at once and has a strict no-logs policy, which makes it considerably secure.

While writing my Zenmate VPN review, I found it pretty helpful that ZenMate is available for all major platforms and most devices. It prevents advertisers from tracking data and is available in multiple languages. ZenMate also has features like IP masking, censorship bypass, malware and tracking controls, and traffic encryption.

For a nominal price, you can even make use of premium features. It’s one of the most affordable VPNs on the market, but I’ll be reviewing whether it’s worth the price or not.

The main features offered by ZenMate are:

It started as a simple plugin for Google Chrome. However, it currently is on the freemium bandwagon with support for Chrome, Firefox, and Opera. It also supports most major devices.

You can install ZenMate for Android or iOS directly from Google Play, while for desktop browsers, you may visit zenmate.com and instantly download it from the link given on the site. It is a reasonably neat and simple VPN with no complications as far as the download sequence is concerned. A simple sign-up and login make it a smooth transition for new users. I find this to be a key attraction with ZenMate, and the learning curve does not confuse users with some unfamiliar features.

I am primarily using the Windows application. Hence my ZenMate VPN review will focus on the same. 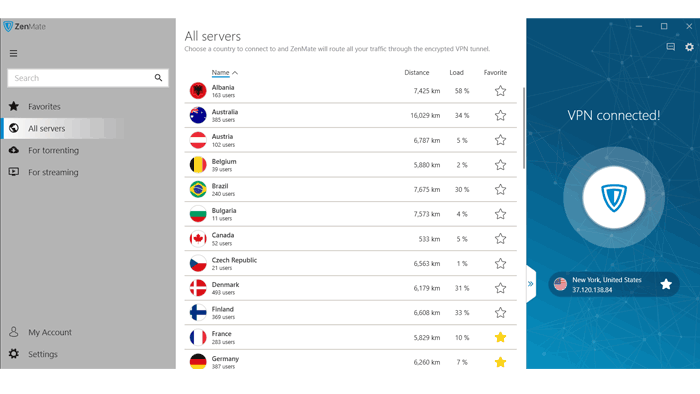 I find the Windows interface to be minimalist and elegant with easy-to-use operability. Double-clicking on the ZenMate VPN desktop icon opens up the main screen.

ZenMate has a single click to connect feature, which means that clicking the button in the center of the app will connect you to the best server, and just like that, you’re anonymous. However, you can choose the server you want from an extensive list manually.

Click on the “Best Server Location” option to view a pop-up of the locations available. You can then choose the server and connect to it.

Select the advanced mode settings from the left dashboard, which allows you to pick advanced options, filters, and location preferences. You can mark locations as favorites or select a torrent or streaming specific performance optimized for the best output. I, for one, absolutely love the streaming-specific option on their advanced filters.

ZenMate’s browser extensions make use of an AES 128-bit encryption. The mobile and desktop clients, however, use AES 256-bit. They are considered industry standards.

The auto-connnect option the VPN automatically connects to a server. Hence, you can let ZenMate determine the best server for you or you can pre-define a server location. 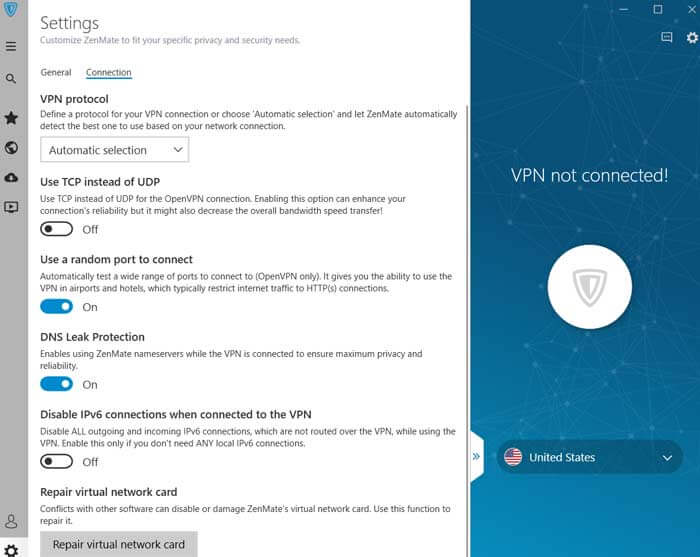 ZenMate does not enable DNS protection by default. Hence, those who wish to use it have to allow it first. ZenMate ensures that your location and identity does not leak by accident.

Identity Shield is meant to notify users when their emails are part of a data breach. Since massive data breaches happen all the time, large numbers of email IDs and passwords leak from any site. The purpose of the identity shield is to alert users in case of a potential data breach after performing regular scans. This service is a crucial step in staying safe in the cyber world and applies to the email address you used to sign up for ZenMate.

It automatically tests all available ports and chooses a free port. Randomizing ports are especially useful in the case where airports or hotels that restrict certain ports. However, the option to manually enter a Port is not available.

If you want a VPN that allows you to manually enter a specific port, read our Ivacy VPN review.

You can use TCP instead of UDP for OpenVPN. You can do this to enhance reliability, but it could decrease the bandwidth speed.

In case you are facing slow speed issues with your VPN, you should check all the factors affecting your VPN speed.

Allows you to choose your custom protocol. You can also opt for an automatic selection to let ZenMate do the work for you.

One of the most essential features of a good VPN is how quick it is. The fastest servers usually belong to those locations that are closest to you. However, a good VPN should provide reasonably good speeds with distant proxy servers as well. In this ZenMate VPN review, now it's time to test the speed.

My original Internet connection Speed at the time of test: 193.83 Mbps

Hence, as per my findings, I can confidently say that ZenMate provides good download speeds. Many tests also suggest that the speeds are consistent.

Yes, you can easily stream Ultra HD or 4K contents. In the entire duration of my ZenMate VPN review, I have watched hours of Ultra HD content without any lags or buffering. Hence, if 4K is your goal, go for ZenMate without a doubt.

What Can ZenMate Unlock?

ZenMate VPN could unlock the following, as far as I checked:

How Secure is ZenMate?

While ZenMate places a great deal of importance on security according to their website, I looked into their documentation to see what ‘secure’ actually means.

Their encryption algorithms are definitely up to industry standards. ZenMate uses IPSec and IKEv2 for Mac users, while Windows users have these along with L2TP/IPSec.

The Premium version allows you to use the OpenVPN tunneling protocol with its entire cybersecurity community for support. Besides, ZenMate supports AES-256 for initial control channel encryption, which is highly robust and secure, making it widely preferred by the industry.

Also, there are no DNS LEAKS. I have checked with several services but could not spot an IP or DNS leak. It is a standard check that we should always do before deciding to purchase a VPN service. However, in my experience, most of the popular paid VPN services will not have leaking issues.

All the features are great. However, I am pretty sure you wouldn’t use a VPN when you can’t trust it with your data. You can read the official ZenMate Privacy Policy here.

There is a lot of chatter that ZenMate VPN records the user's original IP addresses, which does not match their policy of no-logs. However, after carefully going through specific parts of their privacy policy. I can say that they are taking those details in regards to the ZenMate website usage. Hence, that is a general data has nothing to do with the VPN service itself.

While using the VPN, they do not store any data that can directly or indirectly affect your privacy or anonymity.

A Zenmate official informed me their Privacy Policy is due to complete the update. The only generic nonpersonal data on their website is collected by using Google Analytics. However, even if Google Analytics detects your IP and country, they do not disclose the IP to the party using the service. Hence, ZenMate only obtains the Country of the visitor and not the IP of the particular visitor.

How is ZenMate Customer Service?

The absence of chat support is mildly frustrating for users who are accustomed to immediate customer service. Email support is quick, but it offers reasonably standard replies that only provide generic solutions.

Thus, customer service can improve with more specific solutions tailored to the problems. Also, it would be highly beneficial to add the support of a chatbot, as it would make it easier for users to get instant help.

Pricing: Is ZenMate VPN Worth your Money?

ZenMate has pretty reasonable subscription pricing for customers. While the monthly plan is expensive when compared to other VPNs with similar features, the long term schemes are quite attractive.

With its streaming, torrenting, and P2P support, this is a pretty good deal, but there are better ones available in the market. The lack of extra privacy features like Double VPN, Onion Over Tor should be a deciding factor if that is what you need the most. Surfshark and Nord VPN are good choices for extra privacy. However, only Nord VPN supports Onion over Tor.

However, are you are a casual user who wants a solid privacy level, stream contents and at the same time do not want to pay much? In that case, ZenMate VPN is the best for your needs. You can get ZenMate VPN at just 21.95 USD for 5 devices and a full one year.

To conclude my ZenMate VPN review in all honesty, I am happy to see ZenMate perform so well! Specially considering the price. There may be many VPN services claiming to be better. However, at this price point there are none.

Their customer service isn’t winning any significant points. Lack of chat support is a setback for me. However, on the ZenMate website, the support articles serve their purpose.

Who can use ZenMate VPN?

While it is good enough for beginners and people looking for a basic VPN service, ZenMate doesn’t cut it for those who’ve already tried out the premium options out there.

I’d recommend it to home users, as it does have basic functionality and has gone through a lot of improvements in recent times. It has a reliable speed and performance and offers affordable long-term plans that aren’t too hard on the wallet.

The best bet would be to go in for the 7 Days free trial and see if ZenMate matches your needs. It allows you to go through the features and pricing for yourself and then make an informed choice.

If you’re a home user or new to VPNs, the simplistic interface and one-click run could be enough to meet your VPN demands.

I have tried the VPN for two weeks and find it a consistent performer. However, if I have missed something in this ZenMate VPN review, do let me know in the comments section.