ZenMate is a simple, lightweight yet fast and efficient VPN. It supports almost all platforms like Windows, Mac, Android, iOS, Linux, Firestick, Gaming Consoles, Smart TVs, and many more. You can also go app-less and use ZenMate VPN as an extension for Popular Web browsers.

Your online privacy is safe with a strict ZERO-LOGS policy. Are you looking for a super budget-friendly no-nonsense VPN? You are in the right spot.

If you google search VPNs to download, then you will notice the overwhelming amount of VPN software that you can download. So which one will you get? Being third-party software, you have to be careful which one to use and to trust. We are here to make that decision easy for you. Here we will review one of the most widely used and trusted VPNs out there: ZenMate VPN. You can get the best deal by using our ZenMate VPN Coupon Code Section.

Some key features of ZenMate VPN 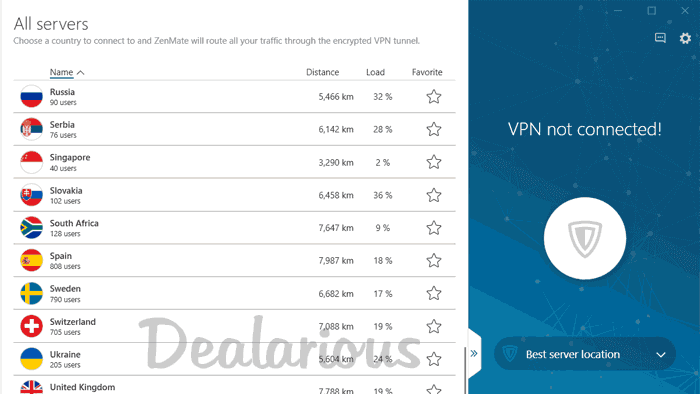 Due to many options that are readily available in the market, many find it difficult to distinguish one VPN from the other. Like what sets a VPN apart and why you should get that particular VPN. Listed below are some of the key features of ZenMate VPN. You can go through them and compare with others out there and see what is different. Hopefully, that will make it easier for you to decide on a particular VPN along with getting to know what ZenMate VPN has to offer to you.

ZenMate VPN supports Windows, Mac, Android, iOS, and extensions are available for browsers. For this review, I am using the windows application of ZenMate VPN.

How to get ZenMate VPN?

You can quickly gain access to ZenMate VPN by going to their official website. You can also add browser extensions of the VPN for easier control of the application, and most people find the extension easier as well.

The VPN provides a seven-day free trial of their premium account, which you can use and decide whether to pay for the application or not. In case you decide to buy do use our ZenMate VPN coupon code and save money.

I downloaded the setup file from their website, which was roughly 8 MB in size. Then launched the installer, and it did the rest. I had to sign-up with my email, and once I had verified that it was indeed the email I used; I was good to go. So it roughly took around a minute for the whole installation process and to gain access to the seven-day free trial. I found it very easy to get started, and I am sure you will as well.

How to use ZenMate VPN

I tried the trial version of the VPN software and was satisfied by how quickly I was able to set it up. Connecting to a remote location was as easy as it got with just a simple click. Changing location was pretty straightforward as well as you had to click on the location you wanted to connect, However, I did find some locations took longer to connect to than the others (considerably long time). Hence, a point worth noting.

Depending on what package you bought from what ZenMate VPN has to offer to you, you will gain access to the servers accordingly.

Their free version allows you to connect to only four different countries with a limited number of servers. More often than not, the speed is not very satisfying or what you would have hoped at the very beginning along with many ads popping up now and then.

Premium users have access to network servers in 35 different countries. Most of the servers are in Europe with some in Asia, North America, and Oceania.

Comparing these numbers with other large and reputed VPN service providers, we can clearly say that they are lesser. However, ZenMate is a growing company, and they are expanding their servers with time, and hopefully, they can do the same with their influence and appeal to the people.

Are you are looking for a VPN with a higher number of servers? Check our Cyberghost VPN Coupon and Surfshark Coupon Sections.

The interface is pretty straightforward and is very easy to connect or disconnect to secure networks. You can say that the interface is simple enough even for primary users who know nothing more than opening the browser to surf the internet. Every action needs just a single click, and the application itself is designed to make everything clear right from the beginning.

I consider myself an avid internet user, who isn’t in the current age? So when I first installed ZenMate VPN, I had no trouble whatsoever getting around and using the application. Not only was everything labeled quickly to figure out what it did, connecting to the servers was the easiest. We can conclude that the interface is very well designed, and one-click action makes things done quickly.

There was some drop in my internet speed after connecting to a remote server. Every VPN causes some speed drop when compared to the original Download speed from your ISP. So naturally, ZenMate had some speed drop as well. But the speed drop was not very high to be alarming or to be brought into consideration. Streaming sites such as Netflix still ran smoothly in high quality.

So you can say that there is little to no effect seen by the internet speed drop once connected using ZenMate VPN.

ZenMate provides secure encryption and protocols to make sure that your communication is secure at each step. We can also say that they are giving security a top-most priority and considering everything while choosing the encryption method and the protocols for digital communication. There is a meager chance of loss of packets and less vulnerability to attacks such as man-in-the-middle etc.

ZenMate offers 128-bit encryption, unlike many VPNs that provide 256-bit AES encryption. The free version has IPSec IKEv2 & L2TP protocols. However, only the premium version comes with an OpenVPN tunneling protocol. ZenMate users get IKEv2 sha256 with a 4096-bit RSA protocol for handshake encryption.

Their encryption supports AES, which is a proven robust, and secure method of encrypting data. So overall, you can rest be assured about how reliable the VPN is and should not be concerned about security flaws and unwanted data leaks.

The answer is yes. Before ZenMate did not support torrenting but now unlimited P2P (Peer-to-peer), however, 7-day the latest premium version, ZenMate VPN supports P2P traffic. Torrenting is always risky, and having a good VPN backing you up, and your data and usage information are always required. ZenMate helps you with just that so that you could torrent all you like and stay protected at the same time from those who are trying to steal your data.

There have been issues raised with ZenMate as to how they are logging the personal information of the users, but now they have stated they are using a no-log policy, but people are still skeptical about it as always. When I was using the VPN, I looked at the surface they provided. Connect, disconnect, and select locations. However, I did not have any clue what was going on under the hood. So you can be sure that a new user does not find anything suspicious or malicious going on internally. However, they are all claims, and ZenMate has denied any involvement in such activities as they have stated on their terms and conditions and have now brought forth that they have implemented a strict no-log policy.

Apart from these allegations of IP logging and IP leaks, the software also has encountered several common issues that are faced by some users from various places. Also, the unexpected crashing of the software, bugs, and unable to connect correctly to a location are a few common issues that were faced by users from time to time. In response to these issues, ZenMate has assured us that they are working non-stop on trying to fix these issues brought into the light and rolling out updates to do so.

Note: The above issues no longer exist as the new company owning ZenMate has made a lot of improvements. Also, now they have a strict No-Log policy. The ZenMate VPN app has received an update to a new version. Hence, resolving all the issues. A good sign is showing the company’s willingness and concern.

The simple answer would be, no, it is not. After the 7-day premium trial ends, you will be asked to upgrade to a plan to continue using the VPN service. However, you can get an excellent discount using a Zenmate VPN coupon code.

You can choose the plan you like for your needs.

However, there is a basic free version that you can choose to get in the form of browser extensions in popular web browsers such as Chrome, Firefox, and Opera. This browser extension is a proxy and not a full-fledged VPN like the desktop version. There is also a catch to the offer. The features that you are allowed to use are limited, such as:

Taking these into considerations, it is suitable for casual browsing like getting access to that region-restricted Youtube video, some streaming services, or playing that game, which is still not available in your country.

How to use ZenMate VPN Coupon Code?

In general, at Dealarious we always try to integrate the available ZenMate VPN coupon code along with the purchase link. Hence, all you have to do is click on the purchase link in the ZenMate coupon section above.

Some hefty features are present in the premium version.

The ZenMate support team is very active and makes sure to fix common errors as soon as possible with their new updates.

Conclusion: Should You Use ZenMate VPN?

Using ZenMate VPN was a smooth experience. The interface is straightforward to navigate through, and if you don’t want to get into techy stuff and want to use a VPN for casual browsing, then ZenMate VPN is for you. The browser extensions are easy to use as well, and you might find them useful if you don’t, want to install an application on your computer.

Therefore to put it all in a nut-shell, I have to say ZenMate VPN is a simple, efficient, and fast VPN.

If you find that the ZenMate coupon code is not working, please let us know in the comment section. We update the coupons regularly.